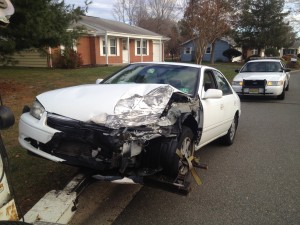 At 07:08 hours on November 21, 2013, a two vehicle crash occurred on County Route 530, at the intersection of South Columbus Boulevard.   A 2000 Toyota Camry being operated East on County Route 530 by Linda A. Ryerson, (age 65 of Whiting) had attempted to make a left onto South Columbus Blvd when she struck a 1990 Jeep Cherokee, being operated Westbound on County Route 530 by Todd Marone of Waretown, (age 35).  After the initial impact, Ms. Ryerson continued on South Columbus Blvd and fled the scene.   Mr. Marone’s vehicle  rotated 180 degrees counterclockwise and flipped onto its roof, striking a curb and a utility pole. Mr. Marone escaped from his vehicle with minor injuries and was transported to Community Medical Center for treatment by Quality Medical Transport.  Ms. Ryerson and her vehicle were located at her residence, after evidence was discovered at the scene.  Ms. Ryerson was not injured in the crash.

The crash is under investigation by Ptl. Jesse Hoydis and Ptl. Douglas Higgins of the Manchester Traffic Safety Section. 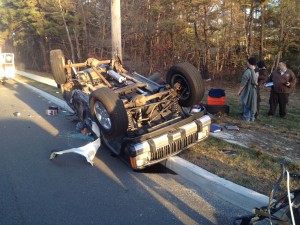