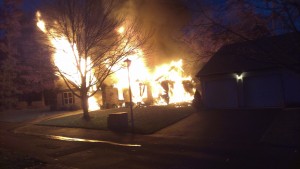 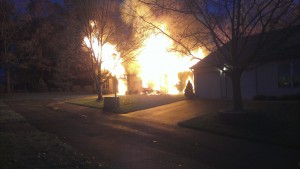 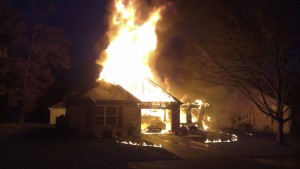 On 11/21/2013 at 16:45 hours, Manchester Police responded to a single story structure fire at 122 Morning Glory Lane in the Whiting section of town.  When Officer Chris Walaszek, Officer Marc Micciulla, and Officer Michael O’Hara arrived on scene, they reported the structure was fully involved and said they observed flames protruding from the roof.  They immediately confirmed that the residence was unoccupied and continued to evacuate neighboring residences that were threatened by the fire.   Fire Departments from Whiting, Manchester, Ridgeway, Bamber Lakes, Lakehurst Boro, and the Joint Base responded and were able to extinguish the fire.  The Manchester Township Building Inspector deemed the dwelling to be uninhabitable and the occupant was relocated with family and friends.  The residence at 120 Morning Glory Lane was also deemed uninhabitable due to the fire.  Several neighboring structures also sustained minor heat damage.  Quality Medical treated the involved parties for precautionary reasons; however no one was transported to the hospital.  The fire is not considered to be of a suspicious nature, but the exact cause and origin of the fire is currently being investigated by the Ocean County Fire Marshal’s Office, Ocean County Prosecutor’s Office, and Manchester Detective Christopher Hemhauser.