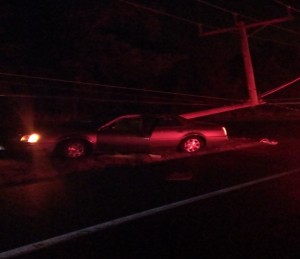 On November 22, 2013, at 10:15pm, a 2002 Cadillac Deville was involved in a one car motor vehicle accident in the area of mile marker 43 on SH 70.  The Cadillac had been traveling westbound when it left the travel portion of the roadway and struck a utility pole.  The driver and sole occupant of the vehicle was 69 year old John Barlow of Whiting NJ.  As a result of the crash, the utility pole was knocked down causing a temporary closure of the west bound lane of SH 70. The NJ DOT Traffic Diversion Team responded and re-routed both the eastbound and westbound lanes allowing SH 70 to be reopened to two way traffic. There were no injuries reported at the scene. Whiting Volunteer Fire Company, and Quality Medical Transport assisted at the scene.  The crash is being investigated by Ptl. Marc Micciulla of the Manchester Township Police Patrol Bureau.