On Sunday, August 23, 2015, at approximately 1:30 p.m., members of the Manchester Township Police responded to the area of Pasadena Road and Red Oak Road, in the Whiting section of the Township for the report of a crash involving a motorcycle. 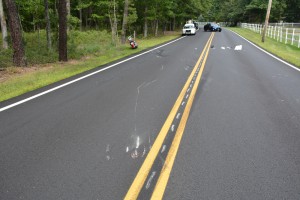 Upon arrival, officers learned that a 1999, Harley Davidson motorcycle, operated by 46 year old James Trusnik of Ewing, NJ, and occupied by 47 year old Dawn Hartzell of Keysville, VA, crashed in the roadway after an encounter with an animal. The investigation revealed that the motorcycle was traveling North on Pasadena Road with a group of other motorcycles when a turkey buzzard, which was reportedly feeding on a nearby deer carcass, flew across the roadway directly in front of the motorcycle, according to witnesses. Mr. Trusnik attempted to brake, but lost control of the motorcycle causing it to crash.

The crash is being investigated by Ptl. Paul Bachovchin and Ptl. Michael Lynch, of the department’s Traffic Safety Section.

The Manchester Township Police would like to remind all motorcycle occupants to wear only DOT approved safety equipment while riding their motorcycles.