Route 530 in the Whiting Section of the Township was closed down for several hours in the area of Pine Ridge Boulevard due to a motor vehicle accident involving a Harley Davidson motorcycle and a Hyundai Sonata.

On Thursday, October 6, 2016, at approximately 2:07 p.m., officers from the Manchester Township Police Department responded to the area of County Route 530 and Pine Ridge Boulevard to investigate the report of a motor vehicle accident involving a motorcycle and a vehicle. Upon arrival, officers learned that a 2015, Harley Davidson motorcycle, being operated by 45-year-old, Robert Worden of Bayville collided with the front end of a 2013, Hyundai Sonata, being operated by 87-year-old Raymond Brueno of Whiting.

The investigation revealed that Mr. Worden was travelling eastbound on Route 530 approaching the intersection of Pine Ridge Boulevard when Mr. Brueno turned left onto Route 530 westbound in front of him. This caused Mr. Worden to collide with the front end of the Mr. Brueno’s vehicle. The impact caused his motorcycle to slide across Route 530 through the oncoming lane of travel and unto the adjacent roadway berm where it ultimately struck a landscape bed paver wall. 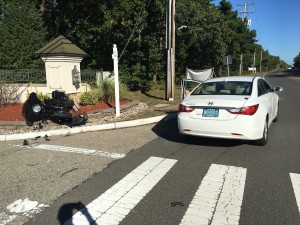 Mr. Worden sustained a serious leg injury as a result of the crash.  He was treated at the scene by Whiting First Aid as well as Paramedics from MONOC and transported to Jersey Shore University Medical Center in Neptune for further treatment.  Mr. Brueno was uninjured and was released from the scene.

Also assisting at the scene were members of the Whiting Volunteer Fire Department. The crash is being investigated by Ptl. Paul Bachovchin of the Department’s Traffic Safety Unit.