Motorcyclist Injured After Being Struck by SUV

Motorcyclist Injured After Being Struck by SUV

At approximately 3:37 p.m. on November 19, 2016, officers from the Manchester Township Police Department responded to County Route 547 in the Ridgeway Section of the Township to investigate a motor vehicle crash involving a SUV and a motorcycle. Upon arrival, officers observed a 1999, Chevrolet Suburban and a 2015, Harley Davidson Motorcycle in the roadway. The Harley Davidson was down on its right side in the right-hand lane of travel. 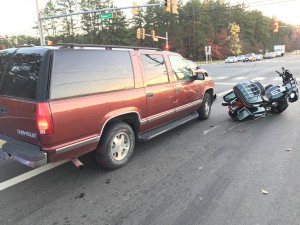 The Suburban was being operated by 38-year-old, John Williams of Manchester, while the Harley Davidson was being operated by 64-year-old, Stanislaw Malek of Somerdale. As a result of the crash, Malek was treated at the scene by members of the Manchester Volunteer First Aid for complaint of knee pain but refused further treatment or transport to the hospital. Williams, the operator of the Suburban, was uninjured in the crash. The investigation determined that Williams was wearing his seatbelt at the time of the crash and Malek was wearing a properly approved Department of Transportation helmet. The crash is currently being investigated by Patrolman Michael Anderson of the Department’s Traffic Safety Unit.