On November 23, 2016, at approximately 7:30 a.m., a Manchester Board of Education School Bus was impacted in the rear while stopped waiting to pick up students at a bus stop on Ridgeway Road (CR 571) approximately 270 feet east of Commonwealth Blvd.  The crash occurred as the driver of a 2009 Jeep Grand Cherokee, identified as Steven R. Tomasi, 35 years of age (Waretown) impacted the rear of the stopped school bus.  The school bus was being operated by Kori Brennan, (age 25) of Lakehurst, and at the time of the crash there were 10 students on board as well as a school aid, who was identified as Theresa Schmidt (age 44) of Whiting. 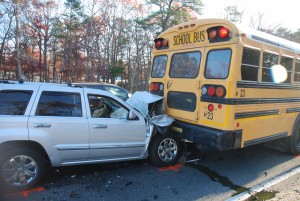 Mr. Tomasi was not injured in the crash.  Ms. Brennan was injured with a complaint of pain to her head and neck.  Ms. Schmidt and one student, a 16 year old female, were injured with complaints of neck and back pain. All injured persons were transported to Community Medical Center.  No other injuries were reported at the scene.