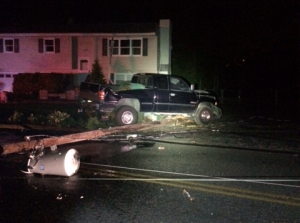 On Sept. 19, 2014 at 12:33 a.m., Patrolmen Matthew Walaszek, Michael Guarino and Michael O’Hara responded to the 1700 block of Beacon Street in the Pine Lake Park section of Manchester for a reported vehicle into a pole. Police were told the driver was attempting to flee the area in his disabled pickup truck.

Upon their arrival, the Officers observed a 1998 Dodge Ram pickup truck with its back tire stuck on the severed telephone pole. Wires were downed and the electrical transformer had fallen to the ground as a result of the crash.

The driver was the only person inside the vehicle and he was removed by Patrolman Walaszek. It was determined that the driver was uninjured in the crash but was operating the vehicle under the influence of alcohol. 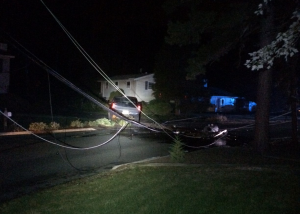 The operator was identified as 34-year-old Nicholas Eosso II from South Westfield Road in Howell Township. He was arrested and charged with motor vehicle summons to include DWI and subsequently transported to Manchester Township Police headquarters.

Manchester Fire Department and Manchester First Aid Squad responded to the scene to assist along with JCP&L and their oil spill response company.

Beacon Street was closed between Commonwealth Boulevard and County Road 571 while repairs to the telephone pole were made. Power outages were reported in the area as a result of the crash.