On Sept. 15, 2014, at 9:02 p.m., Manchester Police responded to Fernwood Hall, Crestwood Village 7, for a reported robbery. Patrolman Brian Collins was the first to arrive and was met by the victim, a 39-year-old Whiting resident, in the hall’s parking lot. 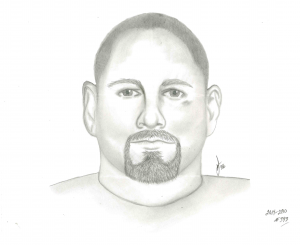 A composite sketch of the suspect. Please click for a larger version.

The victim was found crouched down and had blood pooling on his shirt. He advised Patrolman Collins that he was playing cards with friends and then decided to walk to the Krauszer’s located in Whiting Town Center at 108 Lacey Road.  While walking on Station Road and just before Diamond Road,  the victim was approached by what he described as a white male, 5 feet 9 inches tall, 185 to 195 pounds, stocky build, wearing jeans and a dark colored tee shirt. The man had a crew cut style haircut, goatee, raspy voice, and was said to be extremely intoxicated.

The suspect walked up to the victim and ordered him to empty his pockets. When the victim told him he did not have any money, he heard what was believed to be a switch blade knife open and he was stabbed in his lower left  abdomen.

After the incident, the victim began walking towards Fernwood Hall where he called 911. Responding to the scene were the K9 and Criminalistics Investigation units of the Ocean County Sheriff’s Department, as well as Manchester Township Police Detective Danny Barker.

The victim was transported and admitted to Community Medical Center, where Detective Barker later responded for further investigation. Manchester Patrolman Michael Lynch, Certified Composite Artist, met with the victim today and after an interviewed generated a composite sketch of the suspect based on the description given.

As of this time the investigation is ongoing and police are looking for your assistance with identifying the suspect in the sketch by calling Manchester Police at 732-657-6111 or contacting the Manchester Tip Line by clicking here.  All information can be given anonymously.