During the morning hours of Wednesday, March 13th, officers from the Manchester Police Department joined officers from the Jackson Township Police Department in conducting a traffic enforcement detail along portions of County Route 571 in both municipalities. The purpose of this detail was to enforce New Jersey’s motor vehicle laws as part of an ongoing effort to reduce crashes and increase safety along this particular stretch of roadway.

Since June of 2017, officers responded to approximately 187 crashes along Route 571 in Manchester Township alone. In investigating each crash, it was determined that at least one motor vehicle violation was a contributing factor in the vast majority of those that occurred. 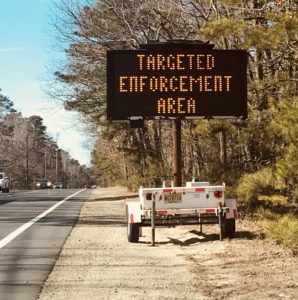 In addition to officers from both Manchester & Jackson, Troopers from the New Jersey State Police Commercial Carrier Unit were on hand to conduct commercial vehicle enforcement, and set-up a temporary truck inspection site at a parking lot along Route 571.

During the detail, officers were targeting ‘Move Over Law’ violations, distracted driver violations to include hand held cellphone use and texting while driving, and seatbelt violations.

As a result of this effort, Manchester and Jackson officers conducted a total of 46 traffic stops and issued approximately 39 summonses within their respective townships during the operation. Additionally, one subject was arrested by Manchester officers on an outstanding warrant, and was subsequently charged with Possession of a Controlled Dangerous Substance.

In addition to the traffic stops, NJSP Troopers conducted a total of 12 truck inspections, discovered numerous violations, and took several trucks out of service.

The Manchester Police Department would like to acknowledge our partnering agencies who made this collaborative effort possible. It is anticipated that additional cooperative traffic enforcement details will take place throughout the year.