On Tuesday, September 15, 2015, at approximately 9:10 a.m., members of the Manchester Township Police responded to the area of Route 70 and Colonial Drive for the report of a three vehicle crash involving an ambulance, pick-up truck and minivan which had caught fire.

Upon arrival, officers observed a 2004 Toyota Minivan burning uncontrollably from the engine compartment in the westbound lane of Route 70. Immediate efforts were made by the first responding officers to extinguish the blaze, but these efforts were unsuccessful. The fire was ultimately extinguished by members of the Manchester Township Volunteer Fire Department. 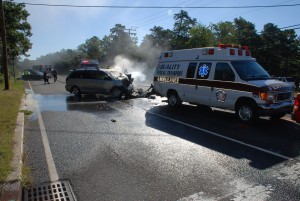 Once it was extinguished, the initial investigation revealed that the Toyota Minivan was traveling west on Route 70 when it struck the rear of a 2006 Ford E Series Ambulance owned by Quality Medical Transport of Bayville. The ambulance, which was not being utilized to transport a patient, was stopped for a red light at the intersection of Route 70 and Colonial Drive at the time of the crash. It was also learned that the impact with the ambulance had caused it to strike the rear of a 1997 Ford Ranger pick-up which was also stopped at the light.

The driver of the Toyota Minivan, 60 year old Lee W. Smith of Brick, was transported by members of the Manchester Township Volunteer First Aid Squad to Jersey Shore University Medical Center in Neptune for a complaint of chest pain. His immediate condition is not known. The two occupants of the Quality Medical Transport Ambulance, 20 year old Steven Purtell of Forked River and 32 year old Hlif Gabrish of Waretown, were transported to Community Medical Center in Toms River for complaints of neck and back pain. The driver of the Ford Ranger, 37 year old Jose Chacon of Lakewood, was not injured in the crash.

Route 70 was closed for approximately one hour after the incident for the investigation and clean-up. This crash is being investigated by Patrolman Douglas Higgins of the Manchester Township Police Traffic Safety Section.