Approximately 50 patrol officers and supervisors successfully completed the two day Conducted Energy Device or ‘Taser’ operator’s training this month which was taught by a contingent of certified police instructors from around Ocean County. Nearly half of the 50 officers received their certification on March 15th, while the other half received their certification on March 16th. 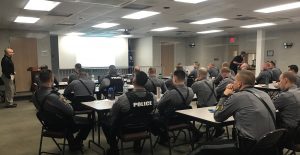 The department purchased the devices in February after they were authorized for use by law enforcement officers in Ocean County earlier this year. Conducted Energy Devices or ‘Tasers’ provide officers with another tool which can be used to safely resolve volatile and potentially violent situations before such encounters escalate to a level where deadly force may be otherwise necessary. The ability to carry and/or use CEDs by law enforcement in New Jersey has only recently been approved by the Attorney General’s Office despite the fact that police officers in many states have been carrying these devices for years. In New Jersey, there are strict guidelines as to when they can be used.

The decision to purchase these devices was made after extensive research was conducted and after careful consideration was given as to their usefulness by officers on the street who have been seeing an ever increasing number of vastly unpredictable and oftentimes dangerous encounters. One such type of call where officers are seeing a marked increase in occurrence is in the area of mental health related or emotionally disturbed persons (EDP) calls. The Manchester Township Police Department has seen a 61 percent increase in the number of mental health related calls between 2012 and 2016. In 2012, department personnel responded to 298 mental health related calls wherein officers responded to 481 such calls in 2016. These types of calls have the propensity to turn violent, oftentimes with little to no warning to the officer. With the deployment of the CED, officers now have a viable option for controlling such an individual without putting themselves in an oftentimes dangerous situation.

The benefit of such a tool was almost immediately known this past Sunday evening when officers responded to a residence in the Pine Lake Park section of the Township for a call involving a suicidal, 27-year-old female armed with a knife. Upon arrival, the officers made contact with the subject who was actively slashing herself with a large kitchen knife. After refusing to comply with repeated commands by officers to drop the knife, a Conducted Energy Device was deployed on the subject. The Conducted Energy Device immediately incapacitated the female, allowing the officers to safely take her into custody, before she could inflict further injuries on either herself or the responding officers. Once secured, the female was transported to a local medical facility for treatment of her self-inflicted knife wounds as well as for evaluation of her mental health issues.

“The use of the Conducted Energy Device by our officer allowed for a safe resolution of an incident which could have easily had a very tragic ending should the officers have needed to utilized deadly force to subdue this individual”, said Chief Lisa Parker. “Prior to the deployment of the CEDs, an officer in this situation would have had less options and little choice in resolving the situation without the risk of significant injury to those involved. In this case, the use of the CED, saved a life.”

In addition to the two-day CED Operators Training Course, authorized officers are also required to attend a one-day Law Enforcement Officers Response to Individuals with Special Needs/Mental Health Issues training course, which is taught by the Ocean County Prosecutor’s Office and area mental health professionals and successfully complete an on-line CED training though NJLearn, which is an e-learning management system (LMS) managed by the New Jersey Office of Homeland Security and Preparedness.