On May 28, 2015, at 7:50 p.m., police responded to a single vehicle crash on Cambridge Circle in the Leisure Village West section of Manchester Township. 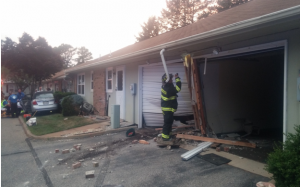 Upon arrival, it was determined that a 2002, Ford Taurus, being operated by 80 year old, Jeanne Donadio, of Manchester was attempting to pull into the garage of her residence when she struck the wall dividing her unit and her neighbors attached unit. After the initial collision with the garage wall, Ms. Donadio then struck the front of the adjoining unit causing damage to the front of that residence.

Ms. Donadio’s vehicle was occupied by 56 year old Lori Warnke of Manchester at the time of the crash, and she was uninjured. Ms. Donadio was the only individual with a reported injury from the crash and she was transported to Jersey Shore Medical Center in Neptune for treatment. Her immediate condition is not known.