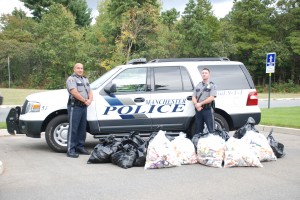 Manchester residents reached into their medicine cabinets and turned in over 400 pounds of prescription drugs to authorities on September 29, 2012. As part of the statewide Prescription Drug Take back Day, anyone could drop off their unwanted, unused and expired prescriptions to participating police departments. Manchester Chief of Police Brian Klimakowski said that township residents got rid of over 400 pounds of medications. Chief Klimakowski said. “Once again I am extremely satisfied with the outcome. I’m appreciative of everyone who participated.” During the April 2012, Operation Take Back New Jersey collected over 16,000 pounds of medications, according to the New Jersey Drug Enforcement Administration (DEA). “Prescription drug abuse has skyrocketed and this is a common way for people who have this type of problem to get these medications,” Klimakowski said. Several drop-off points were set up by police in Manchester and Whiting to make it easier for residents to hand over un-needed drugs. To get the word out, the department provided a press release, posted flyers and used the reverse 911 system to alert residents. During the operation, local and state law enforcement came together with organizations such as the Partnership for a Drug Free New Jersey, the New Jersey Prevention Network, and the New Jersey Police Chiefs Association to deter in-home prescription drug abuse by asking people to empty their medicine cabinets and turn them into their local authorities. The program promotes education on the proper disposal of prescription drugs that is safe for our environment and awareness of the growing problem of prescription drug use for non-medical purposes.