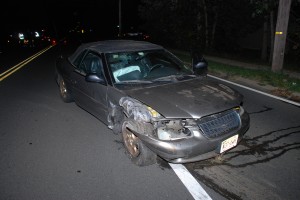 On Sunday, October 7, 2012 at approximately 1:13 am, a 1999 Chrysler Sebring Convertible struck a utility pole on County Route 571 (Ridgeway Road) near the intersection of Fairfield Street. The vehicle was being operated by 21 year old Shantel Smith from South Toms River. The vehicle was traveling east on County Route 571 when it left the roadway striking the utility pole and snapped it in two. The vehicle came to rest in the east bound travel lanes facing west after the crash. The driver of the vehicle was reported to be wearing her safety belt at the time of the crash. She was transported to Community Medical Center by Manchester First Aid for a complaint of head and back pain. County Route 571 was closed in both directions for several hours while the utility pole was replaced. Assisting at the scene were members of the Ridgeway and Manchester Volunteer Fire Departments and Paramedics from MONOC. This crash is under investigation by Patrolman Antonio Ellis of the Manchester Township Traffic Safety Section.