Pedestrian Struck by Van on Route 571 in Manchester

Pedestrian Struck by Van on Route 571 in Manchester 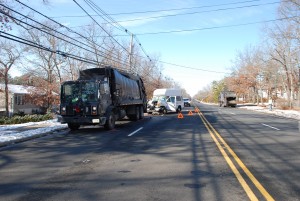 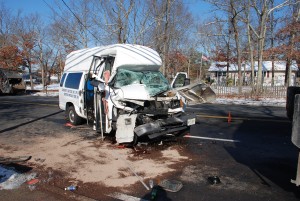 On Wednesday, December 11, 2013 at approximately 9:00 AM, members of the Manchester Township Police responded to the report of pedestrian struck on County Route 571 in the vicinity of Beacon Street in Manchester Township. Responding officers located the accident in the eastbound lane of Route 571 just west of Commonwealth Boulevard. The preliminary investigation revealed that a 2003, Ford Van owned by Community Services Incorporated of Ocean County struck Nathaniel Murray Jr., age 52 of Trenton who was loading trash into a garbage truck. The van then struck the rear of the garbage truck sustaining significant front end damage. The garbage truck, which was owned by Central Jersey Waste and Recycling Inc., of Ewing was stopped in the right hand lane of travel while the crew was collecting garbage from in front of a residence. The driver of the van, James V. Johnson, age 66 of Manchester, sustained non-life threatening injuries and was transported via ambulance to Community Medical Center in Toms River for treatment. The rear seat passenger, Cassandra Mollock, age 77, also of Manchester, who was unrestrained at the time of the accident received more serious injuries and as a result was flown via Monoc helicopter to Jersey Shore Medical Center in Neptune where she is listed in critical condition. Murray Jr., who was alert and conscious when officers arrived, was also flown via Southstar helicopter to Jersey Shore Medical Center where he is listed in stable condition. The driver of the garbage truck, Rodman Bryd, age 55 of Trenton, was uninjured. Assisting at the scene were Manchester and Ridgeway Volunteer Fire Companies, Manchester Volunteer First Aid, Quality Medical Transport, Monoc Paramedics, the Ocean County Sheriff’s Office Criminalistics Investigation Unit and the Ocean County Prosecutor’s Office. The collision is currently under investigation by Ptl. Antonio Ellis of the Manchester Township Police Traffic Safety Section. Residents can receive important, official information directly from Manchester Township Police via Nixle. To subscribe text simply 08759 to 888777 or visit www.nixle.com