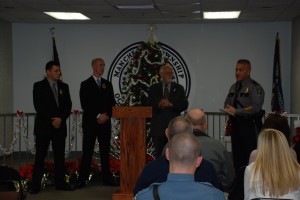 On December 9, 2013, a small ceremony, attended by Business Administrator, Elena Zsoldos, and close family and friends of the newly appointed Officers, was held in the Civic Center at the Manchester Complex.  Chief Brian Klimakowski starts every ceremony with a moment of silence for Manchester Police Officer, Robert Tobias, who was killed in the line of duty. Then, Chief Klimakowski talked about the testing process, which is comprised of a strenuous physical fitness exam, a written examination, an oral board examination, thorough background investigation, physical, and psychological examinations, along with a drug screening. Chief Klimakowski said “after 320 applicants, these two Officers finishing at the top of the list is a great accomplishment.”

Officer Nicholas Greenwood was sworn in first as a part time Class II officer by Mayor Fressola.  Officer Greenwood was born in Brooklyn, NY and raised in Point Pleasant, NJ. He graduated from East Stroudsburg University with a Bachelor of Arts degree in history. He then graduated from the OCPA SLEO Class 31 in December 2012 and has worked for the Pt. Pleasant Police Department as a Class ll Officer.

Mayor Fressola then swore in Officer Casey McPartlin. He was born in Freehold, NJ and grew up in Lakehurst, NJ. He graduated from Richard Stockton College in 2009 where he earned a Bachelor’s degree in Criminal Justice.  He then went on to attend OCPA SLEO Class #32 and graduated in 2012. Officer McPartlin was employed as a Class ll Officer for Lakehurst Borough Police Department prior to his employment as a part time Class ll Officer for Manchester Police. Both Officers will start their assignments and training immediately.