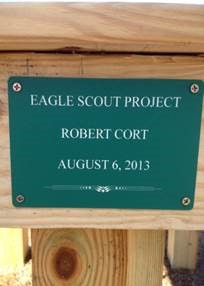 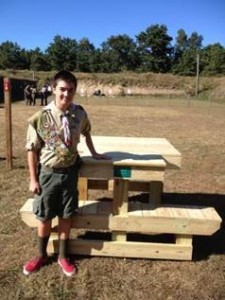 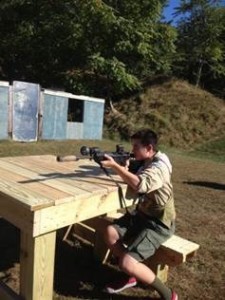 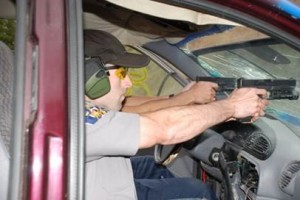 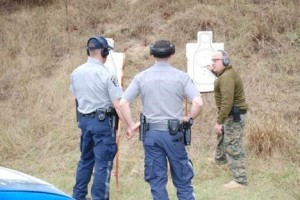 Robert Cort, a 14 year old Boy Scout from Troop 23 Manahawkin, recently donated a custom made shooting bench to the Manchester Township Police Firearms Training Program. The shooting bench was presented to members of the Manchester Township Police Firearms Training Unit by Robert and his father, Joseph Cort. Robert built the shooting bench with donated materials, volunteering more than 54 hours of his time under the supervision of his father. Robert told the Officers that he is working towards obtaining the rank of Eagle Scout and this is part of that comprehensive process. The shooting bench was a much needed replacement to the previous bench which had succumbed to the effects of weather and years of use.

The Firearms Instructor Staff is comprised of twelve Officers that include Chief Brian Klimakoswki, Lt. Vincent Manco, Dsg. James Sharkey, Sgt. Michael Leming, Sgt. Joeseph Hankins, Sgt. Brian Vidovich, Sgt. Salvatore Ventre, Ptl. Christopher Walaszek, Det. Albert Vega, Det. Danny Barker, Ptl. Chuck Gatnarek and Ptl. Christian Nazario. The Firearms Instructors are responsible for the training and qualifications of all of the Manchester Township Police Officers. Members of the Firearms Staff have earned their Instructor certifications through various Federal, Military, State, County and Private training programs. Each of the Instructors dedicate more than 100 hours a year to training and qualifications of all Sworn Officers, further development of their own skills through advanced training, in addition to donating their own time to insure they are providing the most up to date progressive and effective training available to our Officers. All of the Firearms Instructors are former and / or present members of the Ocean County Regional SWAT Team and prior to 2006 the Manchester Township Emergency Response Team.

During this year’s fall qualification and training period the Instructors presented Officers with a series of challenging drills involving shooting through car windshields, shooting moving targets and shooting on the move, to prepare the officers for situations they may encounter in the real world. The training takes place during both day and night hours and is designed to enhance life-saving skills and prepare the officers to recognize and deal with lethal threat encounters. In addition to a full day on the range, Officers also receive additional classroom training to meet or exceed training requirements and better prepare the Officers for situations they are likely to encounter. Prior to the beginning of any training cycle the Firearms Instructors spend a full day on the range preparing and improving on the scenarios the officers will be exposed to during each training evolution. When preparing for semi-annual training the Firearms Staff spends time reviewing current events involving officer involved shootings, attending progressive training classes, and making any necessary repairs to the range to insure a safe learning environment. Manchester Police are also held to a higher shooting standard.  The State requires officers to qualify by meeting the standard of 48 out of 60 hits in the scoring area but Manchester Police standards are a minimal of 55 out of 60 possible hits in the scoring area.

As we move forward into the future there is a strong emphasis on keeping the training as current and realistic as possible in addition to developing new Instructors with the same progressive mindset. To facilitate training the Manchester Township Police Department hosts various firearms and simmunition schools throughout the year, for which the host agency receives complimentary spots. In addition several of the Instructors assist with the training of police recruits at the Ocean County Police Academy to contribute to the overall success of future officers.