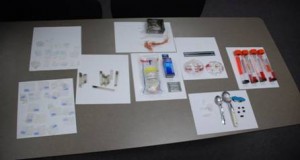 On 11/26/2013, Manchester Township Police received a call  for  a robbery. Information received from the victim indicated that contact was initially made through a website called backpage.com. The victim then contacted Anne L. Donahue (age 33) via the phone number provided on the website. The victim was then provided directions to the Thornbury Lane residence with the intent of receiving sexual favors in exchange for money.  Upon arriving at the residence the victim was greeted by Anne L. Donahue, who did not resemble the photos posted on the website. The victim then tried to leave but was forced by Anne L. Donahue and Philip J. Cottone (age 40) to pay the agreed amount before being allowed to leave the residence.

Members of the Manchester Township Police Patrol Bureau and Investigations Bureau then responded to the residence to protect and prevent any future robbery victims.  While at the residence, Detectives executed a court authorized search warrant which resulted in evidence related to the charges.  Detective Richard Jupinka charged Philip J. Cottone and his girlfriend Anne L. Donahue who were residing on Thornbury Lane in Leisure Village West with Robbery, Criminal Restraint, Theft, Prostitution, Possession of Cocaine, Possession of Heroin, Possession of hypodermic syringes, and Possession of Drug Paraphernalia. After being processed for their arrests Cottone and Donahue were remanded to the Ocean County Jail in default of $150,000.00 dollars bail with no 10% option. Also assisting with the investigation were Detectives Jim Hill and Dan Roske of the Ocean County Prosecutor’s Office High Tech Crimes Unit.