On Friday, September 8, 2017, at approximately 4:23 PM officers from the Manchester Township Police Department responded to the area of Ardmore Street and Sunset Road in the Crestwood Village section of the Township for the report of a pedestrian which was struck by a mail truck. Upon arrival, officers learned that 80-year-old Whiting resident, Helen Melendez had been struck by a U.S. Postal Service which had backed up in the roadway. The initial investigation revealed that the postal truck had just dropped mail off at a mail box on Ardmore Street and was beginning to pull away when it backed up unexpectedly and struck Mrs. Melendez who had gone to her mail box to retrieve her mail. The impact caused Mrs. Melendez to fall to the ground wherein she sustained an injury to her leg and head. Mrs. Melendez was transported to Community Medical Center in Toms River by members of Quality Medical Transport for treatment of her injuries. 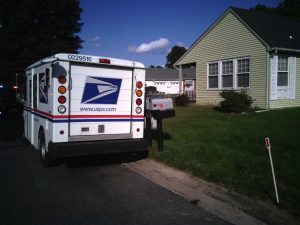 Assisting at the scene were EMTs from Quality Medical Transport and paramedics from MONOC. The road was closed for approximately 45 minutes while officers conducted the investigation. The crash is under investigation by Ptl. Michael O’Hara of the department’s Traffic Safety Unit.