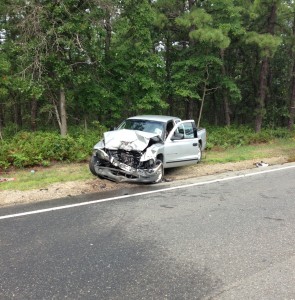 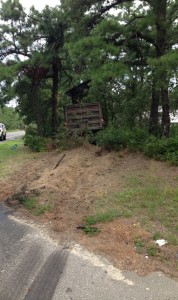 At approximately 09:30 hours on August 10, 2013, a 2001 Dodge Dakota pickup truck attempted to make a left turn from County Route 539 on to Lincoln Blvd. in the Whiting section of the township.  The vehicle was traveling south on CR 539 and was being operated by Thomas E. Graf, age 53, of Whiting NJ.  As the pickup truck attempted to make its turn, it was struck by a 2006 Peterbilt dump truck that was traveling north on CR 539.  The dump truck was being operated by Thomas Manning, age 63, of East Windsor, NJ.  Mr. Graf was flown to Jersey Shore Medical Center by Paramedics from MONOC 1, for treatment of his injuries.  Mr. Manning was treated at the scene for minor injuries.  County Route 539 had to be shut down to traffic for several hours between the areas of Harry Wright Blvd. and Hegstrom Ave. to investigate the crash and to remove the dump truck from the woods.  The dump truck had a full load of sand at the time of the crash.  Assisting at the scene were; Whiting Vol. Fire Dept., Whiting Vol. First Aid, MONOC Paramedics, the O.C. Sheriff’s Dept. CIU, O.C. Road Dept., Manchester Twp. Public Works and Grone’s Wrecker Service.  Any witnesses to the crash are asked to contact Ptl. Paul Bachovchin of the Traffic Safety Section at 732-657-2009 ext 6356.