On Wednesday morning, December 28, 2016, at approximately 9:06 a.m., officers from the Manchester Police Department responded to a Beckerville Road address for the report of a possible structure fire.

Upon arrival, Officer Matthew Juralewicz observed heavy smoke and flames coming from the front of the single family residence. Shortly thereafter, he observed flames coming from the rear of the residence.  It was quickly determined that the residence was unoccupied and that the family dog had been released from the residence by neighbors prior to the arrival of emergency personnel. The fire was subsequently extinguished by fire personnel, however the fire deemed the residence uninhabitable.  There were no other structures damaged by the fire and there were no injuries reported by anyone present at the scene. 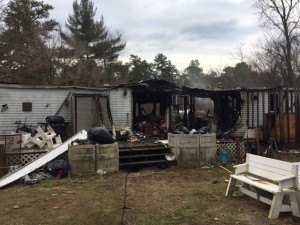 The Ocean County Fire Marshall’s Office is investigating the fire and at this time the exact cause of the fire has not yet been determined.