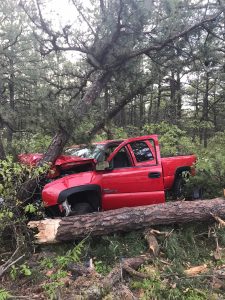 On Saturday May 20, 2017, at approximately 7:05 p.m., members of the Manchester Township Police Department responded to Route 70 near milepost 42 for the report of a single vehicle crash involving a pick-up truck which left the roadway and crashed into the woods. Upon arrival, officers found a 2006 Chevrolet Silverado in the wooded area off of Route 70 which had impacted multiple trees. Behind the wheel of the vehicle was 27-year-old Peter Wesolowski of Manchester. Wesolowski was unconscious and entrapped inside his vehicle. With the assistance of fire personnel from the Whiting Volunteer Fire Department, officers were able to remove the trees that had fallen on top of the vehicle and rescue Wesolowski. After being freed from the vehicle, Wesolowski was transported by medevac helicopter to Jersey Shore University Med ical Center in Neptune for evaluation and treatment of his injuries.

Multiple witnesses to the crash stated that they observed the Chevrolet driving erratically and at a high rate of speed just prior to the crash. The preliminary investigation revealed that Wesolowski was wearing his seatbelt at the time of the crash. 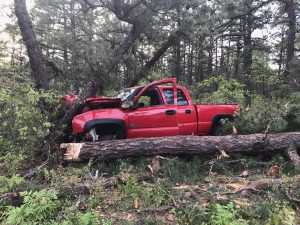 Assisting at the scene were members of the Whiting Volunteer Fire Department, EMTs from Quality Medical Transport and paramedics from MONOC. Wesolowski was treated for his injuries and released several hours later. The crash is still under investigation, but at this point fatigue and a medical condition seems to be a contributing factor into its cause. The crash is being investigated by Ptl. Anderson of the Manchester Township Traffic Safety Unit.