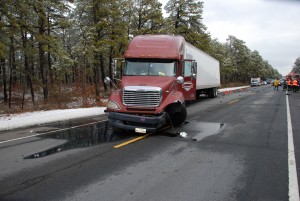 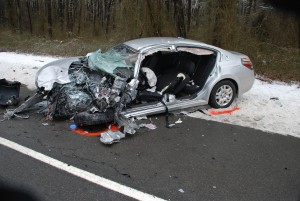 At 12:33 hours on February 4, 2014 a two vehicle crash occurred on NJ Route 70, in the area of mile marker 34.5.  Vehicle 1, a 2012 Nissan Altima was being operated by John Jones (age 72) of Manchester.  Mr.  Jones was traveling east on NJ Route 70, and wearing his seatbelt when his vehicle crossed over the centerline and impacted a tractor trailer, nearly head on.   Vehicle 2, a 2005 Freightliner, Tractor Trailer was being operated by William Nortei (age 53) of Grand Prairie, Texas.  Mr.  Nortei was hauling a 45’ trailer for Summit Trucking of Dallas, Texas.  Mr. Nortei was traveling west on NJ Route 70 and wearing his seatbelt at the time of the collision.  Initial impact occurred in the west bound lane of travel.  After initial impact and separation, Vehicle 1 was forced backwards and came to rest on the eastbound berm portion of the roadway.  Vehicle 2, continued straight and came to rest in the east bound lane of travel.  Mr. Jones was trapped in his vehicle and had to be extricated by Whiting Volunteer Fire Dept.  Mr. Jones was air lifted to Helen Fould Hospital, Trenton, were he suffers from internal injuries.  Mr. Nortei was not injured in the crash.

Anyone with information about this crash is asked to contact the Manchester Township Police Traffic Safety Section, at 732-657-2009 x4400.