On Sept. 27, 2014, at 1:57 p.m. Manchester Township Police responded to the area of Horicon Avenue near County Route 539 to investigate a carjacking.

The victim stated that as he was traveling west on Horicon Avenue when an older model dark blue single cab pickup truck, possibly a Ford F-150 (1992-1996) pulled alongside of him and the passenger pointed a dark colored handgun at him. The victim stated while the handgun was pointed at him the occupants of the dark blue pickup truck used their vehicle to force him to the shoulder of the roadway. The suspect(s) had the victim get off his motorcycle and throw his phone into the wooded area along the roadside and then ordered him to walk into the woods. The suspect(s) stole the victims motor cycle and continued west on Horicon Avenue towards County Route 539 fleeing the area. 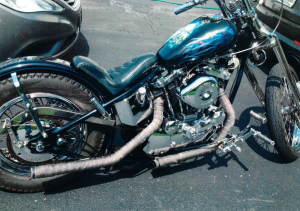 The stolen motorcycle was a blue 1976 Harley Davidson Sportster bearing NJ registration (Q4092). The motorcycle has custom artwork on top of the gas tank, as well as blue and pink flames on the side of the gas tank.

Anyone coming in contact with the vehicle should notify their local police department and exercise caution as the actors should be considered armed. Anyone with information is asked to contact Detective Al Vega of the Manchester Township Police Investigations Bureau at 732-657-2009, ext. 4208. Anonymous tips can be left here through the Manchester Township Police website.