On Sept. 27, 2014, at 1:04 a.m., Patrolmen Michael Guarino and Patrick Mabie were responding to a noise complaint in the Holly Oaks section of Manchester when they came across a motor vehicle crash at the intersection of Colonial Drive and State Highway 70. 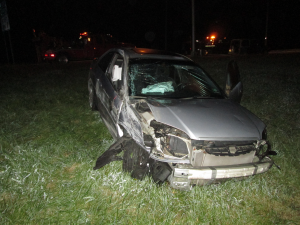 The crash investigation revealed that Robert Foster, 58, of Bacall Square, Manchester, was operating a 1999 Jeep Wrangler westbound on State Highway 70 when he stopped for the red light at the intersection of Colonial Drive. A 24-year-old female, Carmel Apoatle from Pitman, was behind him also traveling westbound operating a 2001 Honda Civic when she failed to stop in time. Ms. Apoatle sideswiped the Jeep, rolling over on the passenger side of her vehicle. She slid through the intersection, making contact with the curb, up-righting the vehicle as it traveled into the grass section of the jug handle. Neither operators claimed injury at the scene.

As a result of his investigation, Patrolman Guarino determined Ms. Apoatle was operating her vehicle while under the influence. She was arrested and transported to Manchester Police headquarters where additional tests were conducted to establish the level of her intoxication. Her vehicle was impounded in accordance with Johns Law and she was released on motor vehicle summons charging her with; driving while intoxicated, careless and reckless driving, failure to observe red signal, failure to maintain lane and failure to inspect her motor vehicle.

Patrolman Guarino was assisted at the scene by Patrolman Mabie.