Daniel Lynch, a 74-year-old Barnegat resident, was operating a 2012 Honda Accord northbound on County Route 539 approaching Hegstrom Road when the vehicle left the roadway and traveled several hundred feet before impacting several trees and overturning onto its roof. 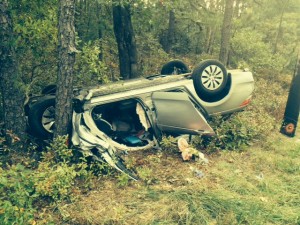 Mr. Lynch was traveling with his wife, Charlene M. Hoverter, age 68. Both occupants were wearing their seatbelts during the crash, which caused front air bag deployment. They were trapped in the vehicle and extricated by the Whiting Volunteer Fire Company.

Ms. Hoverter complained of pain to her back and chest. She was transported to Jersey Shore University Medical Center in Neptune by Whiting Volunteer First Aid. Mr. Lynch complained of pain to his left wrist and chest and was flown to Jersey Shore University Medical Center by New Jersey State Police medi-vac helicopter for further treatment. Additional medical attention was provided at the scene by EMTs from Quality Medical Transport and Paramedics from MONOC.