On Monday, Oct. 6, 2014, at approximately 11:07 a.m., a green 2011 Hyundai Santa Fe traveling north in the parking lot of Super Stop and Shop, located at 400 Lacey Rd. in Manchester’s Whiting section, collided with a grey 2012 Nissan Altima that was traveling east. As a result of the impact, the operator of the Hyundai inadvertently accelerated, causing the vehicle to run off of the roadway and strike a tree before rolling over on its driver side. 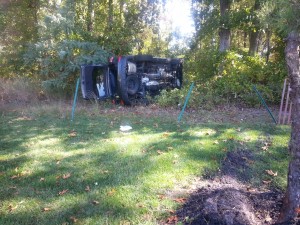 Assisting at the scene were the Whiting Volunteer Fire Department, Quality Medical Transport, and Paramedics from MONOC. The crash remains under investigation by Patrolman Ian Bole from the Manchester Township Police Traffic Safety Section.