Manchester Township Police received a call at 2 a.m. on Oct. 5, 2014, reporting a structure fire at 5 Newbury Row in the Leisure Knoll section of the Township.

Sergeant Richard Mazza, along with Officers Michael Guarino, Michael O’Hara, Matthew Walaszek and Thomas Chant responded and observed smoke and flames already coming through the roof.  The lone resident was already outside of her house and several of the surrounding houses were evacuated due to the blowing embers. 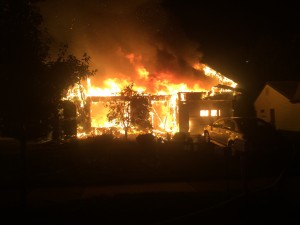 Fire Departments from Manchester, Whiting, Ridgeway, Joint Base, Cassville, and Whitesville responded to extinguish the fire.  Manchester First Aid and Quality Medical Transport assessed the resident as a precaution measure; however there were no reported injuries. 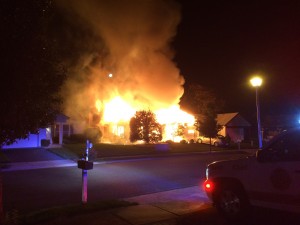 At this point in time the cause and origin of the fire is unknown and the case is actively being investigated.