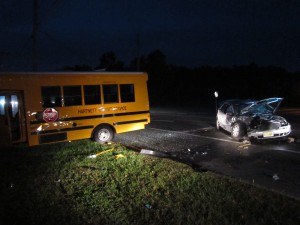 Manchester Township, On Tuesday October 2, 2012 at approximately 5:41 am, a 2012 Starcraft school bus, operated by Hartnett Transit Services, was attempting to make a left turn onto County Route 571 westbound from Etty Court and impacted a 2001 Audi A4 4 door, color silver, which was traveling east on County Route 571. The school bus was not carrying any passengers at the time of the crash. The driver of the Starcraft school bus, 51 year old Charlayne Rooney from Manchester, was properly restrained at the time of the collision and transported to Community Medical Center for the complaint of back pain. The driver of the Audi, 26 year old Lance Rizzuto from Jackson, was also properly restrained at the time of the crash and transported to Jersey Shore University Medical Center by Quality Medical Transport for non life threatening injuries of the arms and legs. Assisting at the scene was the Manchester Township and Ridgeway Volunteer Fire Departments, Paramedics from MONOC, and Quality Medical Transport. The crash remains under investigation by Patrolman Ian Bole from the Manchester Township Traffic Safety Section.