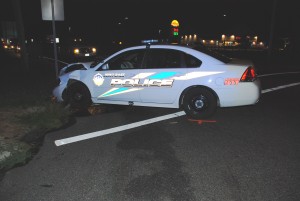 On Monday, August 26, 2013 at approximately 10:02 pm, a Department of Defense Security Forces Vehicle out of McGuire Air Force Base was involved in a collision at the intersection of State Highway 70 and County Route 539. Air Force servicewoman Jasmine Gaffney, a 21 year old female stationed at McGuire AFB, was traveling east on State Highway 70, in a 2011 Chevrolet Impala Police vehicle, when it collided in the intersection with a 2006 Ford Mustang which was traveling north on County Route 539. The Mustang was being operated by Darren Nemow, a 39 Year old male who resides in East Windsor, NJ.  Both Vehicles were disabled as a result of the collision and were towed from the scene. The driver of the Chevrolet complained of hand and hip pain, but refused medical attention. The driver of the Ford complained of shoulder pain, but also refused medical attention.  Assisting at the scene were Members of the Whiting Volunteer Fire Department and Officers from the Department of Defense Police. This crash is under investigation by Patrolman Antonio Ellis of the Manchester Traffic Safety Bureau.