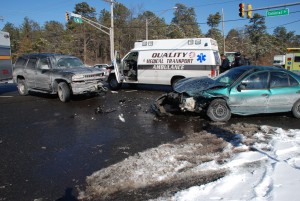 On Wednesday, January 29, 2014 at approximately 12:38 pm, a two vehicle crash occurred at the intersection of State Highway 70 and Colonial Drive. Christopher Perrault, a 42 year old male from Brown Mills was operating a 1998 Pontiac Sun fire east on State Highway 70 when his vehicle collided with a 2001 Chevrolet Tahoe, which was traveling west on State Highway 70. The Tahoe was operated by 23 year old Kashmir Lenaghan of Toms River.  Both Vehicles were disabled as a result of the collision and were towed from the scene. The driver of the Chevrolet complained of knee pain and was transported to Community Medical Center in Toms River for evaluation. The driver of the Pontiac was extricated from his vehicle and was transported by MONOC 1 Medical Helicopter to Jersey Shore University Hospital in Neptune, New Jersey with a complaint of chest, back, neck and shoulder pain. At the time of this release, the driver of the Tahoe, Mrs. Lenaghan, was released from Community Medical Center and the driver of the Pontiac, Mr. Perrault, was in serious but stable condition at Jersey Shore Hospital. Assisting at the scene were members of the Ridgeway and Manchester Volunteer Fire Departments, Quality Medical Transport, Paramedics from MONOC, and the New Jersey State DOT. The cause of this crash is under investigation by Patrolman Antonio Ellis of the Manchester Traffic Safety Section.