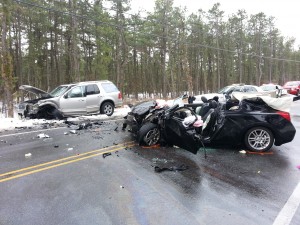 On Sunday January 5, 2014 at approximately 1:25pm, a black 2008 Nissan Altima was traveling south on Manchester Boulevard along the curve when it collided head on with a silver 2004 Ford Explorer.  The driver of the Nissan Altima, 43 year old Michelle L. Pisauro of Browns Mills, was properly restrained, and had to be extricated from her vehicle. She was subsequently transported to Jersey Shore University Medical Hospital in serious condition with internal and facial injuries.  A medevac helicopter was requested to transport Pisauro, however it was unable to fly due to the inclement weather.  The driver of the Ford Explorer, 59 year old Susan Raba, was properly restrained and transported to Community Medical Center for injuries to her extremities.  Both passengers in the Ford Explorer, 61 year old Robert J. Raba Jr. and 46 year old Beverly Crennan of Jackson, were also properly restrained and transported to Community Medical Center with multiple injuries.  Assisting at the scene were the Whiting Volunteer Fire Department, the Manchester First Aid Squad, Paramedics from MONOC, and Quality Medical Transport.  The crash remains under investigation by Patrolman Ian Bole from the Manchester Township Traffic Safety  Section.