On Thursday, October 20, 2016, at approximately 4:30 p.m., members of the Manchester Township Police Patrol Bureau responded to the intersection of Manchester Boulevard and State Highway 70 to investigate a report of a motor vehicle crash. Upon arrival, officers learned that two vehicles had been involved in the crash. 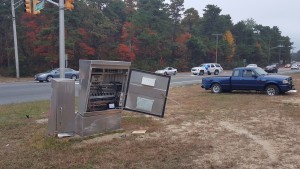 The first, a 2014 Toyota Prius, which had been operated by Martin Sporn, age 90 of Whiting, and the second, a 2011 Ford Ranger which had been operated by Dennis Cleary, age 30 of Manchester. The investigation revealed that the Ford Ranger had been traveling eastbound on SH 70 when the operator of the Toyota Prius attempted to make a left turn from SH 70 westbound onto Manchester Boulevard. While making the turn, the Toyota Prius impacted the driver’s side of the Ford Ranger. The operator of the Ford Ranger subsequently lost control of the vehicle, causing it to leave the roadway and collide with a traffic control box at the intersection. 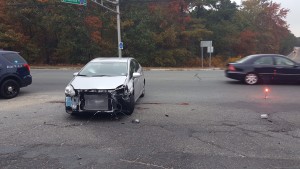 As a result of the collision, the traffic light at Manchester Boulevard and SH 70 was inoperable for several hours. A passenger of the Ford Ranger received treatment by Quality Medical Transport for minor injuries at the scene. There were no other injuries reported as a result of the crash. The collision is being investigated by Ptl. Thomas O’Hare of the Manchester Township Police Traffic Safety section. The NJ DOT assisted at the scene with traffic control.