On Monday, January 29, 2017, at approximately 08:24 am, officers from the Manchester Township Police Department responded to the area of Ridgeway Road and Cedar Drive, in the Ridgeway section of the Township, to investigate a motor vehicle accident involving two vehicles and a struck utility pole. 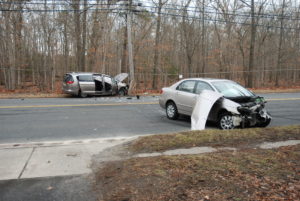 The driver of the Toyota, a 17-year-old Manchester female, had a complaint of pain to her head and back but refused medical attention on scene. She was ultimately transported to a local hospital by a family member for treatment and evaluation. The driver of the Chrysler, 33-year-old, Hassnaa Badra, also of Manchester, and her two children, ages 5 and 4, where uninjured and refused medical attention at the scene.  The roadway has been closed for several hours and a detour established while Jersey Central Power and Light crews make repairs to the utility pole.

Assisting at the scene were members of the Manchester and Ridgeway Volunteer Fire Companies as well as EMTs from Quality Medical Transport.  This crash is being investigated by Corporal Douglas Higgins of the department’s Patrol Bureau and Patrolman Ian Bole of the department’s Traffic Safety Unit.