Vehicle Collides with Median on Route 37 and Overturns; Passenger Transported to Area Hospital for Injuries

Vehicle Collides with Median on Route 37 and Overturns; Passenger Transported to Area Hospital for Injuries

On Saturday, September 5, 2015, at approximately 11:04 p.m., members of the Manchester Township Police responded to the area of Route 37 and Colonial Drive for the report of an overturned vehicle. Upon arrival, officers located a silver 2012 Chevrolet Impala on its roof in the eastbound lanes of Route 37 just past the intersection of Colonial Drive.

Initial investigation revealed that the Impala was traveling westbound on Route 37 when it failed to maintain its lane of travel and collided head-on with the concrete center divider in the area of Colonial Drive. The vehicle then went airborne, crossed over the concrete divider and traveled approximately 70 feet before it flipped over onto its passenger side and rolled onto its roof in the eastbound lanes of Route 37. After landing in the eastbound lanes, the vehicle proceeded to slide on its roof in a westbound direction on Route 37 before coming to final rest approximately 320 feet from initial impact with the median. 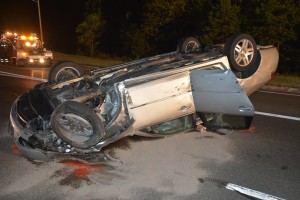 The driver, 21 year old Eric Larson of Jackson, was properly restrained at the time of collision and refused any medical treatment at the scene. The passenger, 22 year old Taylor Bromberg, was also properly restrained; however, he sustained significant abdominal injuries. Bromberg was transported to Community Medical Center in Toms River by the Manchester Township Volunteer First Aid Squad where is condition is not immediately known.