On Wednesday, August 26, 2015, at approximately 9:10 p.m., members of the Manchester Township Police responded to the area of Route 547 and Landsdown Road near the entrance to Joint Base McGuire-Dix-Lakehurst for the report of a two vehicle accident involving a car and a motorcycle. 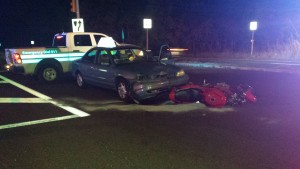 Upon arrival, officers learned that a green, 1998 Mercury Mystique, was traveling southbound on Route 547 when it collided with the back of a red, 1996 Suzuki motorcycle. The motorcycle, which was stopped at the intersection at the time of crash slid approximately 25 feet on its side before coming to rest in the southbound lane of travel on Route 547.

The impact caused the operator, 18 year old Anthony Leone of Manchester, to be ejected from the motorcycle. He sustained injuries to his left arm and was transported to Community Medical Center in Toms River for treatment. The driver of the Mercury, 49 year old James Applegate of Manchester, was not injured and was properly restrained at the time of the collision.