On Thursday, December 13, 2018, at approximately 11:17 a.m., officers from the Manchester Township Police Department responded to 1220 Route 70 in the Whiting Section of the Township to investigate a motor vehicle accident involving a vehicle which had crashed into a medical building, injuring three patrons inside. 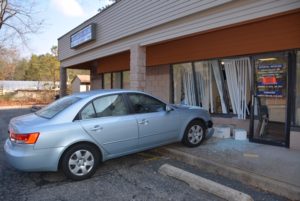 Upon arrival, officers observed a blue, 2007, Hyundai Sonata on the front walkway of the Medical Associates of Marlboro Internal Medicine, Cardiology, and Podiatry building. The vehicle had heavy front end damage and there was extensive damage to the front of the building.

The investigation revealed that the driver of the Hyundai, 78-year-old, Helen A. Bach of Whiting, was attempting to park her vehicle in front of the building, when her foot slipped off the brake pedal and hit the gas. As a result, the vehicle propelled over the curb, and through the brick and glass front of the building, causing significant damage and injuring three patients inside the establishment’s waiting area. The force of the impact, forced a 51-year-old, female Brick resident and an 88-year-old, female Whiting resident from their seats to the floor. Both were sitting adjacent to the area of impact. The two were transported by Whiting Volunteer First Aid and Quality Medical Transport, respectively, to Community Medical Center in Toms River for treatment and evaluation of non-life threatening injuries.  A third individual, identified as a 76-year-old female resident from Haledon, was transported by Quality Medical Transport to Kimball Medical Center in Lakewood. She was also treated and evaluated of non-life threatening injuries.  Bach was uninjured in the crash.

Assisting at the scene were members of Whiting Volunteer First Aid Squad and EMTs from Quality Medical Transport. Also assisting were inspectors from the Manchester Township Department of Inspections. The establishment will be closed until repairs are made to the building. The investigation into the crash is still ongoing, but at this point, driver error appears to be the main contributing factor.  This crash is being investigated by Ptl. Jesse Hoydis of the Manchester Township Traffic Safety Unit.