A vehicle fire was reported to Manchester Police at 10:31 am yesterday at the intersection of Valley Ct and Penwood Dr in the Crestwood Village section of Whiting. When Ptl Scott Thompson arrived on scene, the hood of the 2000 Dodge van was already engulfed in flames. The owner / driver of the vehicle, James Finn, 54, of Whiting, was able to remove some of his property from the burning van before it became too dangerous to continue. Mr Finn explained to Ptl Stephen Hankins that he was driving his van when he smelled gas, then he heard a “whoosh” sound. It was at that point smoke began to flow from underneath the hood. 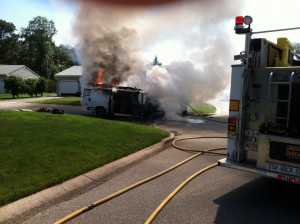 The fire quickly spread to the passenger compartment of the van. Several residents watching the fire were told by police to move to a safer distance. Whiting Volunteer Fire Company arrived to extinguish the fire. They were assisted by Lakehurst Volunteer Fire Company and Quality Medical Transport ambulance service was also on scene as a precaution.