On Sunday, July 16th, at approximately 7:36 p.m. , members of the Manchester Township Police Department responded to the intersection of Route 539 and Route 530 in the Whiting section of the Township to investigate a motor vehicle accident involving a motorcycle and two vehicles. 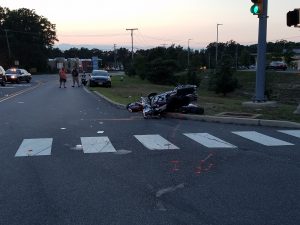 Upon arrival, officers observed a red, 2008, Harley Davidson Road King on its side against the curb with two injured occupants lying in the roadway. Also at that location were the two other involved vehicles; a silver, 2012, Hyundai Sonata and a 2012, Jeep Wrangler. The Sonata had extensive damage to its front end and windshield and the Wrangler had minor passenger side damage. 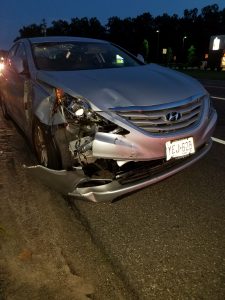 The investigation revealed that the Harley Davidson, which was being operated by 41-year-old, Brian Klapproth, of Browns Mills was exiting the Wawa Plaza and entering the intersection onto Route 539 south when it was struck by the Hyundai Sonata. The Sonata, which was being operated by 85-year-old, Leonard Cerame of Whiting was traveling west on Route 530 when it struck the motorcycle. The collision caused both Klapproth and his passenger, identified as 45-year-old, Becky McCrosson, also of Browns Mills to be ejected from the motorcycle. McCrosson was thrown onto the Hyundai’s hood and windshield before landing on the asphalt.

After colliding with the motorcycle, the Hyundai collided with the Jeep Wrangler which was stopped in traffic in the left turn lane of Route 530 east.  Klapproth sustained abdominal injuries and was transported by ambulance to Community Medical Center in Toms River, while McCrosson sustained a head injury and serious injuries to both arms and was transported to Jersey Shore University Medical Center by medevac helicopter. Cerame was uninjured and refused medical attention.  The driver of the Jeep, 26-year-old, Kaitlyn McQueen of Forked River was also uninjured in the collision.

The roadway was partially closed for several hours during the investigation and cleanup.  Both occupants from the Harley Davidson were listed in stable condition as of late Sunday evening.  Assisting at the scene were EMTs from Quality Medical Transport and paramedics from MONOC. This crash is being investigated by Patrolman Ian Bole of the department’s Traffic Safety Unit.