On Monday, July 17th, at approximately 6:54 p.m., officers from the Manchester Township Police Department responded to the intersection of Route 70 and Route 571 in the Ridgeway section of the Township to investigate a motor vehicle accident involving a motorcycle and two other vehicles. 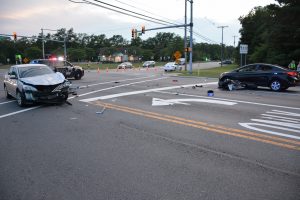 Upon arrival, officers observed a gray 2015 Suzuki GSXR on its side and pinned underneath a black 2014 Hyundai Elantra with two injured occupants lying in the roadway. Additionally, a silver 2015 Nissan Sentra was found disabled in the intersection with extensive front end damage.

The investigation revealed that Suzuki was traveling west on Route 571 when it collided with the Nissan Sentra which was making a left turn onto Route 70 east bound.  The collision caused both the driver and passenger of the Suzuki to be ejected from the motorcycle and thrown to the roadway. After impacting the Nissan, the motorcycle overturned and slid along the roadway until it collided with the Hyundai Elantra, becoming wedged under the vehicle’s undercarriage.

The driver of the Suzuki, 23-year-old Brandon Richardson of Burlington, sustained injuries to his arms and legs and was airlifted by medevac helicopter to Jersey Shore University Medical Center for treatment. His passenger, 37-year-old Jazzelle Queen-Richardson of Bordentown, sustained serious injuries to her head, neck, and back and was also transported to Jersey Shore University Medical Center by medevac helicopter for treatment.  The driver of the Nissan, 29-year-old Alexander Andrade of Lakewood, and the driver of the Hyundai, 44-year-old Rebecca Calicchio of Whiting were both uninjured in the collision. The roadway was closed for several hours while the investigation was being conducted and the scene was being cleaned up. Both occupants from the motorcycle were listed in serious but stable condition as of late Monday evening.

Assisting at the scene were members of the Ridgeway Volunteer Fire Department, as well as detectives from the Ocean County Sherriff’s Department’s Crime Scene Investigation (CSI) Unit and the Ocean County Prosecutor’s Office. Also assisting were EMTs from Quality Medical Transport and paramedics from MONOC.  The crash is being investigated by Patrolman Ian Bole of the Manchester Township Police Traffic Safety Unit.