On Thursday, March 17, 2016, at approximately 4:30 p.m., officers from the Manchester Township Police Department responded to the report of a head-on collision on Route 530 near the intersection of Lacey Road in the Whiting section of the Township.

Upon arrival, officers located a dark blue, 2006 Lexus GS, facing east in the eastbound lanes of Route 530 and a light blue, 2016 Ford Escape facing north on the eastbound berm of the roadway. Both vehicles had extensive front end damage. The preliminary investigation revealed that the Lexus GS 470 was travelling westbound on Route 530 when it crossed the double yellow center line and the center turn lane and struck the Ford Escape, which was travelling eastbound, head-on. 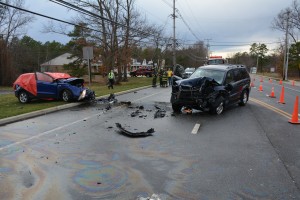 The driver of the Escape, 71 year old, Thomas Kubes of Whiting, sustained fatal injuries as a result of the crash and was pronounced at the scene, while the driver of the Lexus, 69 year old Fred Wood Jr., also of Whiting, sustained non-life threatening injuries. He was flown via NJSP helicopter to Jersey Shore University Medical Center in Neptune where he was last reported to be in stable condition. The roadway was closed for several hours while the crash was being investigated and the vehicles removed.

Assisting at the scene were members of the Whiting Volunteer Fire Department and Quality Medical Transport as well as detectives from the Ocean County Sheriff’s Office Crime Scene Investigation (CSI) Unit, and the Ocean County Prosecutor’s Office. The crash is being investigated by Officers Antonio Ellis, Michael Lynch and Michael Anderson of the Manchester Township Traffic Safety Section.