A Morningside Street home, located in the Pine Lake Park Section of the township was deemed uninhabitable after emergency responders extinguished a fire at the residence on Friday March 18, 2016.

At approximately 1015 hours, Patrolmen Patrick Morgan and Michael Terranova responded to 500 Morningside Street for a report of a residential structure fire. Upon arrival they reported heavy smoke and flames coming from the residence. A quick on scene investigation determined that all occupants of the residence had exited safely, with the exception of family pets that perished in the fire. 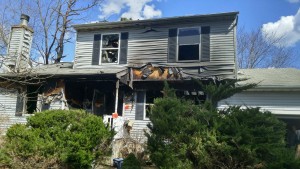 As a result of the fire, three firemen suffered minor burns. They were treated for their injuries at Brick Hospital. The exact cause of the fire has not yet been determined, though it appears to be accidental in nature. The incident remains under investigation by Manchester Police Detective Craig Beaulieu, the Ocean County Prosecutor’s Office, and members of the Ocean County Fire Marshall’s Office.

The Manchester Township Police Department extends their sincere gratitude to the many brave men and women of the above fire companies for their dedicated service.  We would also like to wish a speedy recovery to the injured firemen.