On Friday, January 19, 2018 at approximately 6:13 AM, officers from the Manchester Township Police Department responded to the intersection of Ridgeway Road and Commonwealth Blvd for a report of a multi-vehicle crash.

Upon arrival, officers observed four vehicles in the roadway which were partially obstructing both directions of travel. The initial investigation revealed that a 2013 Chevrolet E250 cargo van, being operated by 30-year-old, Michael Hudak was travelling westbound on Ridgeway Road when it abruptly struck the rear end of a 2016 Toyota Highlander which was stopped for a red traffic signal at the intersection of Commonwealth Boulevard. The force of the impact drove the Highlander, which was being driven by 27-year-old Ashley Haszko, forward causing it to impact a 2013 Hyundai Elantra, which was also stopped for the traffic signal. The Hyundai was being operated by 46-year-old Monique Marra. After striking the Toyota, the Chevrolet van skidded out of control, striking a 2005 Cadillac SRX which was being driven by 32-year-old, Latoya Nicholson as she was stopped in the left turn lane. 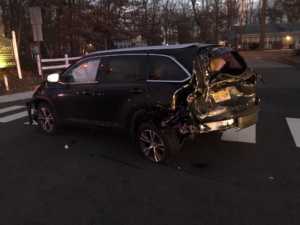 Out of the four involved motorists, all of which were from Toms River, only two reported injuries. These injuries were all reported to be minor. Haszko reported head pain while Marra reported head and neck pain. Both were transported by ambulance to Community Medical Center in Toms River.

Early indications are that driver fatigue may have been a contributing factor as it appears as though the operator of the Chevy van fell asleep prior to striking the Toyota Highlander. The investigation also revealed that Hudak was not seat belted at the time of the crash. 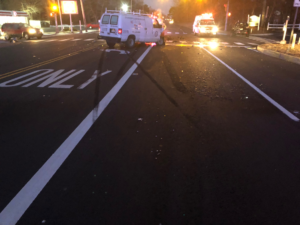 The roadway was partially closed for approximately one hour during the rush hour commute while officers investigated the crash, tended to the injured and cleared the scene. Assisting at the scene were EMTs from Quality Medical Transport as well as officers from the Toms River Police Department. This crash is currently under investigation by Ptl. Anderson of the Manchester Township Police Department’s Traffic Safety Unit.