Fire at Whiting Substation Causes Nearly 4200 to be without Power

Fire at Whiting Substation Causes Nearly 4200 to be without Power

A transformer fire at a Whiting JCP&L substation cause nearly 4,200 customers to be without power in the western section of the township the afternoon of Monday, January 15, 2018. The fire, which was located by a nearby patrol officer, occurred inside of the fenced-in facility on Station Road just off of County Route 530. Fire crews from the Whiting Volunteer Fire Company as well as power crews from JCP&L quickly arrived on scene to extinguish the fire and restore the power. 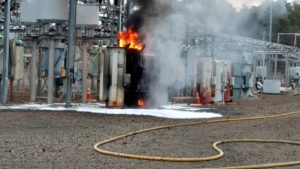 At approximately 1:50 pm, Officer Brian Volk, who was patrolling in the area Manchester Boulevard and Lacey Road heard a large “boom” coming from the area of the nearby electrical substation. While investigating the noise, he observed a large transformer fire inside of the fenced in electrical substation. The fire and subsequent damage to the transformer caused a power outage which affected approximately 4200 customers in the Whiting section of the township. Officials initially estimated that the power would be out for approximately 3-4 hours, however, electrical crews were able to quickly restore power once the fire was extinguished. Because of the frigid outside temperature, the Manchester Office of Emergency Management established a warming station at the Whiting Volunteer Fire Company on Route 530. It, however, was not needed due to the quick response of both the fire department and the JCP&L repair crews. 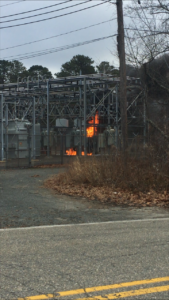