Resident Donates Another CED to Department

Resident Donates Another CED to Department

Betty Bulbach does it again! Thank you, Ms. Bulbach, for generously donating another Conducted Energy Device (CED) to the Manchester Township Police Department. 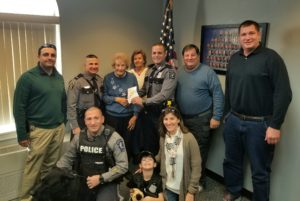 Ms. Bulbach first made a donation of a CED, more commonly known by its former brand name of Taser, in mid-2017 after reading a news article about the deployment of a device in our Township. Joined by her family members, Ms. Bulbach, who is 93 years old and active in the Manchester community, recently stopped by headquarters to present her donation while meeting with Lt. James Komsa and other officers.

In 2017, the Township Council approved the purchase of 20 Taser X2 CEDs after police administrators presented a case to the Council that they would prove advantageous to the department. Only days after the CEDs were put into service last March, one was used to subdue a suicidal Manchester woman who was armed with a knife and slashing her arms and neck. The CED allowed responding officers to diffuse the situation immediately.

Because the purchase of CEDs is currently restricted to law enforcement agencies, Ms. Bulbach donated the monetary equivalent. The money will be used by our agency to purchase a fully equipped unit and its addition will directly benefit the members of the Patrol Bureau in their daily operations.

Thank you again, Betty, for your continued support of the Manchester Township Police Department and your community!