Ambulance and SUV Collide on Route 37

Ambulance and SUV Collide on Route 37

On Wednesday afternoon, January 3rd, at approximately 3:41 p.m., officers from the Manchester Township Police Department responded to the area of Route 37 and Colonial Drive for the report of a motor vehicle crash involving a SUV and an ambulance. Upon arrival, officers located the two involved vehicles, a Manchester Volunteer First Aid ambulance and Hyundai Tucson in the roadway with heavy front end and side damage. 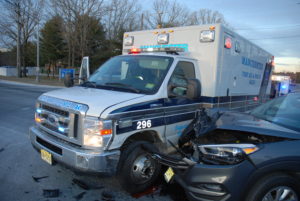 The initial investigation revealed that the ambulance was traveling southbound in the northbound lanes of Colonial Drive when it collided with a 2016 Hyundai Tucson that was traveling westbound on Route 37 in the intersection. The ambulance, which had been transporting a patient to Community Medical Center in Toms River, had its lights and sirens activated at the time of the crash but had entered the intersection against the red traffic signal. Upon entering the intersection, the two vehicles collided in the westbound lanes of Route 37. The ambulance driver, 20-year-old, Chase Swartz of Seaside Park and his front seat passenger, 52-year-old, Caroline Bruckel of Manchester were uninjured in the collision. Additionally, the 57-year-old on-board patient, was not injured but did need to be transferred to another ambulance after the crash. The driver of the Hyundai Tucson, 77-year-old, Lorraine Flatley of Whiting as well as her front seat passenger, 82-year-old, Annette Black, also of Whiting, sustained minor injuries but refused additional medical attention at the scene. 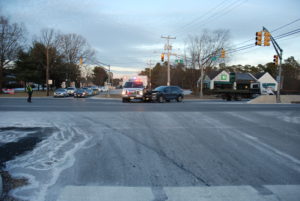