On Sunday, December 31, 2017, at approximately 8:59 pm, officers from the Manchester Township Police Department responded to the area of Mile Marker 36 on Route 70, in the Whiting section of the Township to investigate the report of a multi-vehicle crash.  Upon arrival, officers observed that three vehicles had been involved and that all three had extensive front end damage as well as air bag deployment. The vehicles as well as the associated crash debris obstructed the passage of vehicular traffic in the area. As a result, Route 70 was closed down in both directions between County Route 539 and County Route 530 in Pemberton Township. 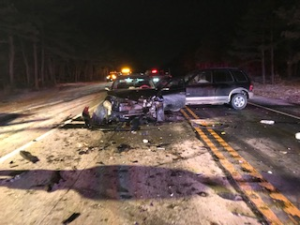 The preliminary investigation revealed that a 2001, Kia Sportage, being operated by a 17-year-old male from New Lisbon, NJ was traveling west on Route 70 and attempting to pass multiple vehicles. When the juvenile operator observed oncoming traffic rapidly approaching, he attempted to abruptly maneuver his vehicle back into his lane of travel.  In doing so, he lost control of his vehicle, crossed the center line and careened into oncoming traffic in the eastbound lane of travel. The first vehicle the Kia struck was a 2005, Infiniti Q56 SUV being operated by 36-year-old David Demsey of Atco, NJ.  After striking the Infiniti, the Kia continued to spin and struck the front and eventually the driver’s side of a 2006, Mazda 616 which was being driven by a 17-year-old female from Pemberton Township. 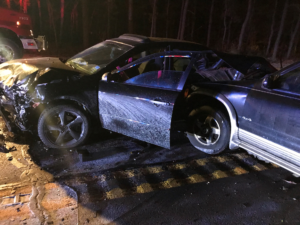 The female operator of the Mazda reported being injured in the crash was transported to Lourdes Hospital in Browns Mills, where she was treated for a broken hand.  The driver and passenger of the Infiniti as well as the operator of the Kia Sportage were not injured and refused medical treatment. Route 70 remained closed for approximately three hours while the crash was investigated and the scene cleared. 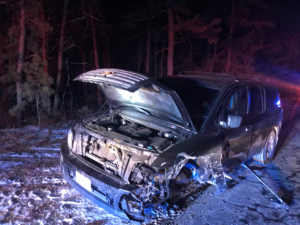 Assisting at the scene were members of the Whiting Volunteer Fire Department, EMTs from Quality Medical Transport, officers from the Pemberton Township Police Department, and members of the New Jersey Department of Transportation.  This accident remains under investigation by Ptl. Marc Micciulla of the department’s Patrol Bureau. Anyone with information is asked to contact Ptl. Micciulla at (732) 657-6111 ext. 6384. 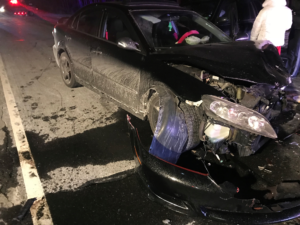