On Friday, June 9, 2017, at approximately 10:22 p.m., members of the Manchester Township Police Department responded to Clay Mine Road in the Pasadena Section of the Township to investigate a motor vehicle accident involving an overturned all terrain vehicle. 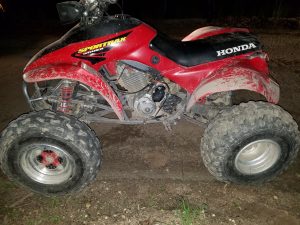 Upon arrival, officers observed a red, 2003, Honda TRX300 Sportrax on the shoulder of the dirt roadway.  The investigation revealed that the Honda was traveling west on Clay Mine Road when the operator lost control of the vehicle and drove off the roadway. After leaving the roadway, the ATV collided with a raised dirt berm and overturned, ejecting the operator. The driver, 28-year-old, Constance Robinson of Manchester, was wearing a DOT approved helmet at the time of the collision and sustained injuries to her face, neck, and back.  Ms. Robinson was transported to Community Medical Center in Toms River for treatment of her injuries and was listed in stable condition as of early Saturday morning.