On June 13, 2017, at approximately 0048 hours, the Manchester Police Department received a report of a burglary in progress at a Hillside Drive residence, located in the Savannah Acres section of Manchester Township.  The homeowner returned home to find that his residence had been ransacked.  At the same time, he heard a loud noise emanating from the rear of the residence.  The homeowner contacted the police and Manchester officers immediately responded to the scene where they began their investigation. Manchester Police K-9 Officer, Steven Wendruff and his partner, Lynk, were summoned to the scene to conduct a track of the suspect(s). K-9 Lynk subsequently tracked directly from the scene of the burglary to another residence, also located on Hillside Drive where the officers identified a suspect.  As a result of the on-scene investigation, K-9 track and interviews that followed, the suspect, Christopher Wohltman, age 31, of Hillside Drive was arrested and charged on June 13th with burglary and possession of a controlled dangerous substance.   Mr. Wohltman was later released on a summons in accordance with the Attorney General’s Bail Reform Policy. 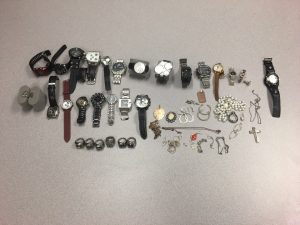 As the investigation progressed, a second burglary suspect was developed and identified as John Grogan, age 29, of Martin Luther King Drive, Jersey City.  Members of the Manchester Township Police Investigations Bureau, with the assistance of Detectives from the Bayonne Police Department, located Mr. Grogan at an address, on East 15th Street in Bayonne, New Jersey.  Mr. Grogan was found to be in possession of several items that had been stolen from the Hillside Drive residence.  Mr. Grogan was arrested and charged with burglary and theft, also on June 13th.  Additional charges are pending further investigation.  Mr. Grogan was transported from Bayonne to Manchester Police Headquarters for processing and was subsequently lodged in the Ocean County Jail.

The investigation is ongoing and the Manchester Police Department is seeking additional information from the public regarding this incident.  Information can be reported to Detective Adam Emmons at 732-657-2009, Ext. 4203.

Residents are reminded that suspicious activity can be reported to the Manchester Township Police Department anonymously at 732-657-6111 or online via the Department’s website, www.manchesterpolicenj.com, by clicking the “Tip Line” link.